(3433)
$6.99 (as of January 27, 2023 04:49 GMT -08:00 - More infoProduct prices and availability are accurate as of the date/time indicated and are subject to change. Any price and availability information displayed on [relevant Amazon Site(s), as applicable] at the time of purchase will apply to the purchase of this product.)

American artist Amanda Palmer once said, “Art is food for the soul, and an artistic climate is a healthy climate because it breeds empathy.” Indeed, participating in the creative process of making art has many benefits both in mental and physical health. Even if you’re not “good at art,” you’ll still enjoy a worthwhile experience.  Participating in art brings various health benefits, especially in mental health. Psychology professionals and experts use several art mediums to help people dealing with physical and mental problems. Since the mid 20th century, the use of arts for its therapeutic effect had started to emerge, and the term “art therapy” was born.

Are you curious about the effectiveness of art therapy for kids? We LOVE art here and love artists. Art is underappreciated and under used in meaningful ways, especially for kids. These are the REAL clinical cases among kids where art therapy has made a difference. Read on!

Are you new here?

Why not check out our collection of free coloring pages for kids! We update our resources library regularly so feel free to check back as we add more and more content. We’re currently at over 1000+ coloring pages and creating more how-to-draw stuff art tutorials!

What Is Art Therapy?

Art therapy aims to improve the mental and physical well-being of people by participating in art-making activities. Its main objective is to let the patient experience the creative process of art and provide a safe space for self-expression. Therapists would use disciplines of both art and psychology to achieve healing and recovery.

Creating art itself is a therapeutic and enjoyable experience, but appreciating another person’s art can also bring self-improvement. People undergoing this therapy can also enjoy other people’s artwork and take a creative experience from it. As a group activity, it also fosters the development of social skills and healthy coping mechanisms.

A person doesn’t have to be good at art to enjoy the experience. The experience alone is what makes art therapy special. It teaches a person to be comfortable with purposeful meaning-making and self-exploration. In turn, this helps a person get a better understanding of oneself and other people.

Art therapy is not all about the artwork created. It is also about the human experiences and relationships formed while working with the artwork.

One of the main strengths of art therapy is improving someone’s self-expression. People who create art often analyze their creations, which helps in understanding how they feel. Through their artwork, they can better understand their emotions, thought processes, and why they do certain behaviors.

The reason above is why art therapy encourages the creation of tangible art. Therapists will use drawing, sculpting, painting, coloring, and more activities that result in a physical form of artwork. Art therapy has been utilized to deal with severe stress, behavioral problems, mental health problems, and traumatic experiences.

The success of art therapy also extends to younger participants, especially for those who are suffering from anxiety. According to a Long Island University study, the non-threatening approach of art therapy helps children feel more comfortable expressing themselves.

Working with materials and watching your art transform also promotes a feeling of achievement. Feeling good about yourself is one of the ways to overcome anxiety. Additionally, the final artwork provides a glimpse of the child’s development. This method paves the way for therapists to uncover developmental problems that talk therapy alone cannot reveal.

Additionally, art therapy can help a therapist get an insight into what is triggering a child’s anxiety. According to Mental Health Foundation, one of the most effective ways to reduce anxiety is to face the fear or the trigger. By knowing what causes persistent fear to the participant, the therapist can develop a plan to lessen the impact over time.

Due to its similarities, parents would often mistake art therapy to “play therapy,” and that’s not a bad thing. Doing art activities is comparable to playing, primarily when the therapists use games and props in sessions.

People had been using art therapy for recovery and healing, even during ancient times. Although the term was only first used during the 1940s, its concept has been present earlier in history. Most documented cases are from the modern era.

Numerous art therapy cases show success in improving mental health and reducing anxiety in children. Here are some of the known cases and studies that tackle anxiety and similar mental health conditions.

In 2006, Diane Walker of Clinical Child Psychology and Psychiatry studied how art therapy can be used for people with emotional, developmental, and behavioral problems. One such case is with a teen girl named Amanda, who is manifesting self-harming tendencies.

Amanda had been the type of person to withdraw and isolate herself from other people. Additionally, she had been known to have trust issues and a tendency for cutting behaviors. If she’s not getting mocked for her self-harming tendencies, other children are instead afraid of her because of it.

With this in mind, the therapists decided to engage Amanda in satisfying yet straightforward art-making, such as sprinting from potatoes and making monoprints.  At the end of the study, she was able to trust other people and gain self-confidence. Although her self-impression is “being unwanted,” that perception changed when the therapist and other participants had admired and her potato prints.

Here’s another study that uses art therapy to help children with behavioral issues. In 2011, Frances Markland from the University of Manchester had asked three participants to learn more about the effect of art therapy on people with psychological trauma. One of these participants was the eight-year-old boy, Christopher.

At his young age, Christopher had been under different foster care. Due to this upbringing, he was diagnosed with Attachment Disorder, as well as Attention-deficit Hyperactivity Disorder.

When Christopher participated in the study, he manifested attachment difficulties such as dislike to strangers and unfamiliar adults. He was also easily agitated and had some aggressive tendencies toward other children.

In the study, Christopher participated in painting using different materials and different themes. 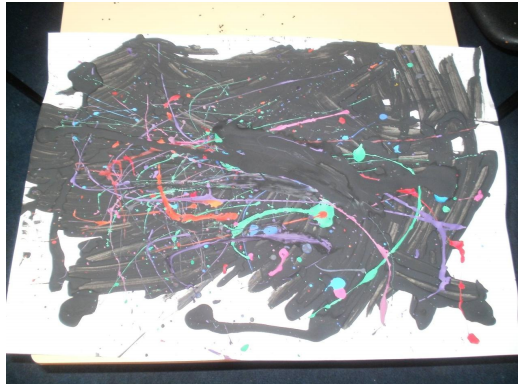 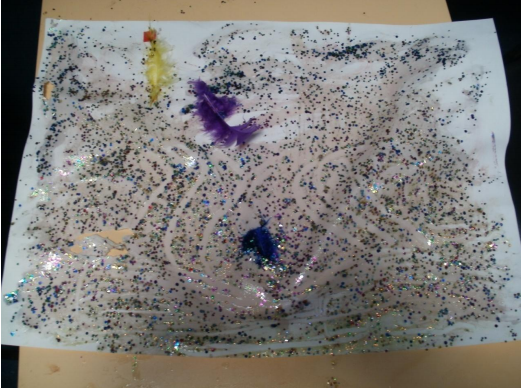 Christopher underwent art therapy with the main objectives of improving self-awareness, self-expression, and emotional regulation. At the end of the study, the child understood his emotions a bit clearer, resulting in fewer anger issues and aggressive incidents. He was also able to make more positive interactions with other people, but the school setting is still challenging.

Although this case has been a work in progress after the study, art therapy sessions were still a success for Christopher. It was one of his first steps in recovery and better well-being.

Let’s admit it: schooling is one of the earliest sources of stress for most people. People who are under heavy stress have a bad temper or reduced cognitive performance. According to Dennis Creedon of Phi Delta Kappa International, school failures often stress the majority of students. And this phenomenon is commonly observed in urban schools.

For example, in Chicago alone, up to 50% of the city’s youth suffer from depression and similar emotional issues. Most children attending urban schools are already overloaded with stress. The pressure from the fear of failing in school can be a bit too much for young learners.

Creedon’s study had found out that integrating arts in urban schools can help in creating an emotionally positive learning environment. One of the 2nd-grade teachers used visual effects and paintings in his classes, which significantly improved his students’ performance. Students who were engaged in music had greatly enhanced focus even under stressful situations.

Art therapy is also shown to be an effective way to help a family face their everyday troubles. The University of Florida had conducted a study about family art therapy in 2005. Among the participants in the Jacobson family. The family consists of a mother, stepfather, and a young teen named Nick.

At the time of the study, Nick was under an intensive outpatient program due to his anger and drug issues. During the study, he was living with her mother and stepfather during the weekends and with his biological father on weekdays.  Nick had been pass around between his mother and father, who divorced when he was young.

Nick’s biggest issue is the heavy use of marijuana and alcohol. He’d been known to have violent and angry outbursts when he’s under the influence. In addition, his relationship with his father is rocky at best and apathetic at most due to the latter’s involvement in racing.

Jacobson’s family’s dynamics show how the stepfather was more focused on racing.

This next case is a study from the Toronto Art Therapy Institute and revolves around the effect of anxiety on children. Although there are tons of studies regarding adult cases, only minimal research had been done on younger participants. In this study, four participants are experiencing different levels of anxiety due to certain medical conditions. All of them are between the age of 11 and 14 during the study.

Anthony and Walter were diagnosed with generalized anxiety disorder or GAD. On the other hand, Pierre and Edward are both diagnosed with Asperger’s. All of them participated in different art activities such as painting, sketching, and molding clay.

Depiction of anxiety and frustration from the participants

At the end of the study, most participants were able to relax during the post-session. The participants were also able to express their anger and worry via safer means such as using stress balls and creating artwork. Their moods and behavior were also improved after the art therapy.

Overall, art therapy is seen as a safe space for children to learn more about self-expression and build self-esteem. More and more studies are showing the positive results of art therapy for children suffering from trauma, disabilities, anxiety, and even stress. It is an engaging way to help children heal from their emotional wounds and build more awareness of their own strengths and weaknesses.

We would much appreciate it if everyone who enjoyed or benefited from our free content can give us a social media share or link back on your website! This will allow us to 1) support independent artists and 2) create new content and teach young children everywhere to create art. Thank you.

(5104)
$34.99 (as of January 27, 2023 05:02 GMT -08:00 - More infoProduct prices and availability are accurate as of the date/time indicated and are subject to change. Any price and availability information displayed on [relevant Amazon Site(s), as applicable] at the time of purchase will apply to the purchase of this product.)
Author: Lily P.
Filed Under: Activities for Preschoolers, Art Activities For Kids, Kindergarten, Primary Elementary (1-3), Toddler (Aged 1-3), Upper Elementary
Fake FBI & CIA Badge Template for Kids (Pretend Play & Coloring Activity)
10 Simple Ideas to Celebrate Christmas in July With Kids That Anyone Can Do