Have you ever had a deep yearning for pizza? Ok, silly question…who hasn’t! This salty, cheese-y, crunchy-crusted goodness is one of the best food masterpieces in the world! Speaking of masterpieces, since art is all about passion, give this easy-peasy how-to-draw pizza tutorial a try…especially if you’re thinking about pizza too much.

How To Draw Pizza Slice Step By Step 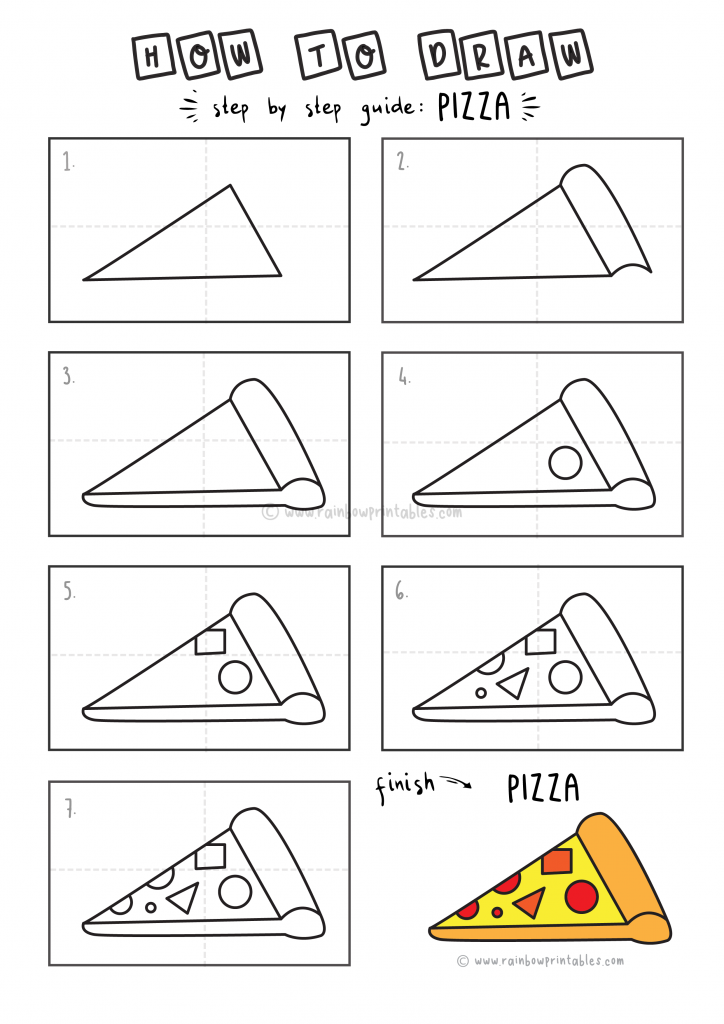 1. When you have a New York slice in your hands, it’s almost always these two things: triangular and HUGE! So let’s start drawing a big, long triangle with a steep, pointed end and a shorter wall on the opposite side. This triangle will become the bed of yummy cheese.

3. The pizza is taking shape but needs a bottom crust. The bottom crust looks almost like a half-drawn spoon already so mirror the bottom of the triangle until it looks like you have a full spoon shape that has a flat handle with a rounded head at the end.

4. The best part of making a pizza to me is decorating it with toppings. And that’s what we’re doing! I love myself a good pepperoni classic so draw a small round circle inside the triangle.

5. Next we’re going with ham slices. Draw a ham square next to the circle within the bounds of the triangle shape.

6. Let’s kick up the toppings with more pepperoni circles, squares, and triangles. There are no rules now – you can add button mushrooms, mini round sausages, or dice cut rectangular pineapples and more.

7. Woah! That’s a nice slice of ZA already! Let’s hit it with some color: a golden yellow crust, smooth mild yellow cheese, and toppings in red, orange, pink, green, sunny yellow…that’s up to you!

Pizza is an uncomplicated piece of art: it can be both simple and versatile at the same time. If you’re looking for more pizza & art inspirations, how about a free pizza crochet tutorial?