Unicorns are timeless fantastic creatures that have been become hugely popular in modern culture again. They represent rarity, magic, fantasy, and kindness. Unicorns are much more on paper than just a horse with a horn. Now that science has discovered historical fossil remains that suggested ‘ancient unicorns’ existed over 29,000 years ago…I was so excited I just had to show you my version of the fictional unicorn drawn in a simpler and easier way.

How To Draw a Simple Unicorn – STEP BY STEP

The one thing unicorns are not known for is being easy to draw. Unicorns can be complicated so we will make it simple and easy here in this tutorial. With this side view tutorial, we created a super simple-to-draw fluffy unicorn inspired by Despicable Me Agne’s famous white and pink fluffy unicorn. (Imma Die!!) 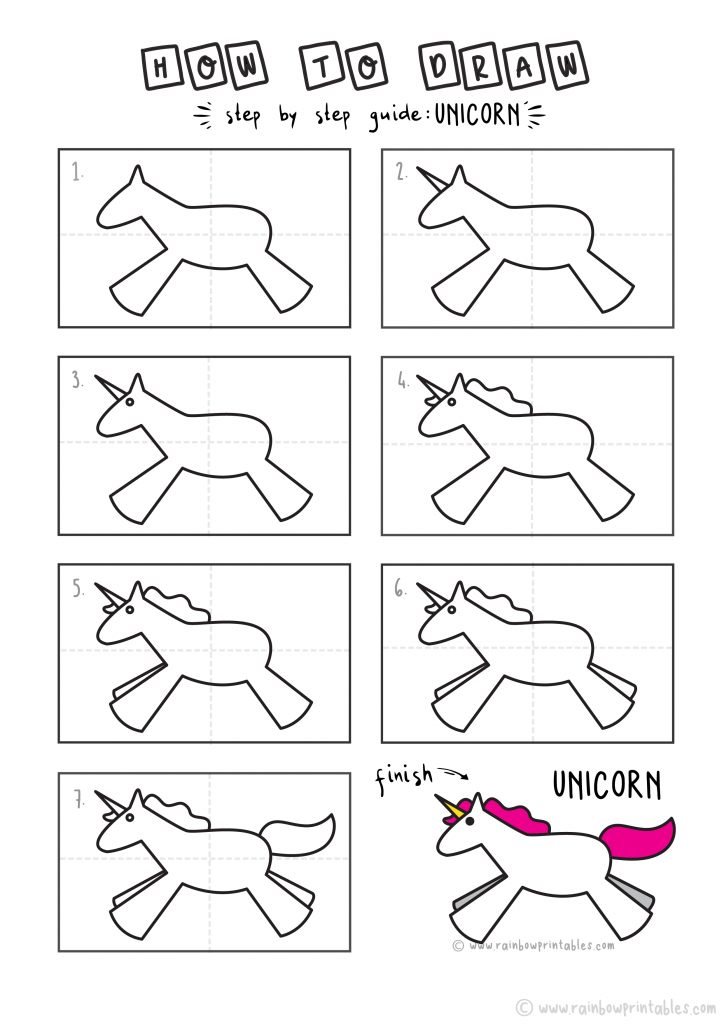 1. Start with a pointed ear like the steep roof of a house.

2. Next, connect the ear to the face + snout of the unicorn in a lopsided half football shape.

3. From the head, draw a thick neck stretching down to the body.

4. Sketch out the round outline of a long oval body that will become the unicorn.

6. Now add 2 more legs in the back, partially hidden, on both ends of front and hind legs.

7. Add the unicorn horn on the top of the head, this is a simple cone like pictured. But you can add a slight curve to the cone shape horn as some unicorns are thought to have.

8. Give the unicorn life by drawing a big eye on the side of the head. I used black but unicorn eyes can be any color (red, purple, blue etc.)

9. Draw a unicorn mane (as long and fluffy as you want) with 3 soft waves on the back of the neck.

10. Next draw a small fluff of mane on top of the head too.

11. On the upper rump of the unicorn, draw a fluffy tail, and voila! You just drew a very simple unicorn. See, unicorns don’t have to be hard!

Add in whatever color, cutie mark, or pattern you want on the unicorn. We went with a bright magenta mane and plain white body just like Agnes’s stuffed unicorn. If you want more unicorn inspirations, check out this unicorn-themed coloring page gallery.

These How-To-Draw step-by-step tutorials can really help add a little diversity and create a starting point to get your kids drawing with more diveristy.

They will learn to: